Added a new feature that people have been asking me for since I created SFC to begin with: Comments Integration. 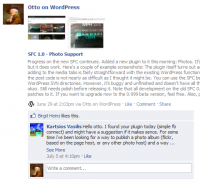 When you make a post with SFC, the publisher plugin has the ability to push that post to either your Facebook Page or Profile. Up until now, the auto-publish feature has been doing this and storing meta-data with the post about the resulting “story” id that Facebook sends back. This data was stored, but not really used.

No longer. Now, if you auto-publish to Facebook, you have the option to pull comments back from that automatically published Facebook post and show them in the blog as if they were normal WordPress comments.

You can see this in action here on my own site. On the SFC 1.0 Photo Support post, you’ll find a comment at the bottom made by a user named “Kartsios Vasilis”. That comment wasn’t left here on this site, it was left on the Facebook story corresponding to that post. As you can see, the avatar for the user shows up on the comment, it’s styled differently (I felt the blue background sort of distinguished it), and it doesn’t have a reply link.

Since these aren’t “real” WP comments, and don’t live in the WP database, you can’t reply to them properly. So the reply link is automatically removed for them. I used a styling rule in the CSS to add the “This comment was originally made on Facebook, so replying to it here is not allowed.” message where the Reply link would normally be. Because this is just using a simple CSS style rule, you can make that message anything you like, or not have it at all. That’s up to you and your theme.

The new feature is relatively painless too. No configuration is needed. Every 6 hours (minimum), the plugin will retrieve the relevant comments from the Facebook posts, then store them as a transient. This reduces the amount of work since it doesn’t have to talk to Facebook every time. The comments are then integrated in with the normal comments for the post, and the comment count is updated to reflect the right number.

There’s still some minor detail work to be done. . The final version will have the comments integrated in correctly by the date and time they were made. Edit: This is now working, comments are added in the proper order.

If you want to use the beta version of SFC (currently marked as version 0.999) you can find it in the WordPress Plugins SVN repository.

Edit: The CSS to add this text, since people asked, is this: