Note: An actual working implementation of the WP_Filesystem can be found in my Pluginception plugin.

Lot of talk amongst theme authors recently about writing local files. Writing files from code, whether it be from a theme or from a plugin, is generally bad mojo. However understanding why you shouldn’t is confusing to many, and then understanding why you shouldn’t do-it-yourself and should use the WP_Filesystem is even more confusing. To further muddy up the waters, many theme authors have expressed confusion at how to use WP_Filesystem in the first place.

So, let’s run the gamut in this tutorial. Note that I wrote it quickly, so it may be uneven in parts.

Why Not To Do It

Take the Dynamic CSS case to start with, since it’s the most common one by far. Some theme authors say “I’m making a framework/system/construction-kit where the user can define their own theme/layout/color-schemes and thus produce a bunch of CSS. I want to save this CSS in the theme/uploads directory, and then put a link to it from their page, so that the browser downloads it from there.

Why they shouldn’t do that: There’s half a dozen reasons here, but the big two are a) put just the dynamic parts of CSS inline into the page instead, because it’s faster, simpler, and avoids an extra HTTP roundtrip for the user’s browser to get this CSS file and b) writing a CSS file locally is insecure as hell if you do it in the “natural” way.

Security is going to be a big issue for the next two items, so I’ll cover it right now.

Modern UNIX-like systems have the concept of “users”. When I SSH or FTP into my hosting account, then I’m logged in as me and my user account. However, my webserver doesn’t run as my user account. It runs under some different user account, usually “nobody” or “apache” or “web” or something similar to that.

Shared hosting systems have many users files all served by the same webserver. So if I allow that “nobody” user to own files that are part of my webpage, then anybody else can use their account on the same webserver to modify those files, and thus modify my webpage. For the case of CSS files, this poses a cross-site-scripting risk. Somebody else on my shared webserver could insert code into my CSS files and change them so as to steal my account information. Bad mojo.

The other two, where theme authors are saving configuration or exporting and importing things have the same basic problems, although the risks might be even higher. In one case, I found a theme saving its configuration settings by creating a PHP file in the uploads directory and then using var_export to export the configuration variable to it. Then it proceeded to include this file when the theme loaded, to load its configuration back in. Talk about insecure, anybody running this theme is basically handing over the entire control of their website to anybody on the same web server.

How To Do It Anyway

“But Otto”, I hear you shouting from halfway around the world, “WordPress itself writes files all the time! It can even upgrade itself. How is this safe?” Well, Mr. Incredbly Loud Person, WordPress uses a system called WP_Filesystem to make this safe.

The WP_Filesystem basically support five different ways of writing files to the system and they all ensure that ownership of those files remains firmly in the hands of the same person that owns the WordPress files. In other words, it writes files using your user account and not as the webserver user.

I’m sure many people have seen this before: 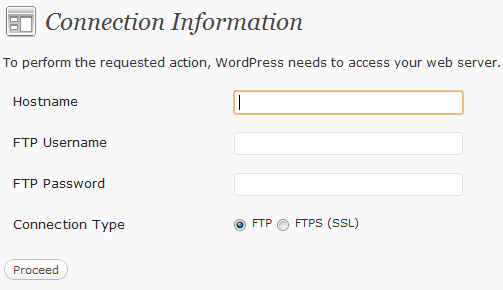 This is the basic connection information screen that appears when you try to upgrade a plugin or themes or even the core code, on certain hosts. Some people may be running on hosts that don’t pop up this screen, but the basic process behind it still exists.

Essentially, what is going on here is that WordPress does some tests to detect how it can write files to the server and keep the same owner for those files. If it can’t do it directly, then it does it indirectly via FTP. It needs your login credentials at this point in order to log in as you and thus write files as you instead of as the webserver user that it’s running under.

How to Implement the WP_Filesystem code

Okay, now we have a new options menu. Let’s make a form to put on that menu:

Simple, no-nonsense form. It calls a function to check the incoming button press first (see more below), then it displays a form. It outputs a nonce, makes a button called “Save a file” since that’s what we’re going to do, then stops. Easy.

Note that the otto_check_buttons() function returns true or false, and this then returns when it is true, thus not displaying the form. This is simply to allow us to display the normal form or not, depending on what we need to do later.

So, when you submit the form, then that otto_check_buttons() function is going to come into effect. Let’s look at the beginning of that function:

The beginning of it is simple. If the user hasn’t submitted the form yet, then it just returns false to make the previous function display the form. Next it checks the referer nonce, to make sure the nonce is correct for the page we’re on. Let’s continue:

Here, I’m defining two variables that I’m going to use later. The form_fields is an array of the names of the fields in the form that I want to pass along through that connection information screen. In this case, I defined my “save” input field before, and it’s something I’ll be checking later, so it has to pass through that form. What happens is that the connection information form generates an extra hidden input with the contents from my first form.

The method variable is not strictly necessary. I’m forcing it to use the “ftp” method for this demonstration code. Normally, you leave this blank and the system figures it out for itself. Changing ‘ftp’ to just ” here works fine.

Finally, you can see where I’m checking to make sure the save button was clicked. Moving on:

Now is the part where I get the credentials from the user. The request_filesystem_credentials() does several things.

When we get those credentials, we have to check to make sure they work. Here’s how we do that:

Simple, really. We call the WP_Filesystem and see if the credentials work. If not, we call request_filesystem_credentials a second time, but this time with the $error flag set. This produces the error message and form to the user so he can correct the information.

Finally, we should have working credentials from the user and all the information we need, so we use the $wp_filesystem global to write out a file.

That’s really all there is to it. I made a file in the upload directory called “test.txt” and wrote “Test file contents” to it. The global $wp_filesystem variable is what our call to WP_Filesystem($creds) created. This $wp_filesystem supports various different file functions, but the put_contents() function is the easiest one to understand. I gave it the filename, some contents, and the correct permissions for a file on the system. Simple and easy.

Because of the various permissions systems in use, the WP_Filesystem supports many different ways of writing files to the system, but all abstracted out into simpler functions like put_contents() and get_contents() and such.

The only downside to it is that sometimes you need to ask the user for their account information in order to be able to get the access you need. But this is necessary in order to be secure, since you don’t want everybody else on the same server to be able to write to your files. And while you may have a server all to yourself, most of your users won’t. The most common setup for WP is on shared hosting, and if you’re creating a theme or a plugin, you should design for those users as well.

A copy of all the code above made into a demo plugin can be found here: wpfilesystem-demo.phps.